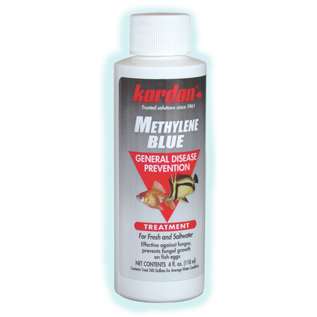 Methylene Blue is effective against superficial fungal infections of fish. The drug may be used as an alternative to Malachite Green for the control of fungus when it is known that the fish to be treated are sensitive. Methylene Blue is safe for use with fish eggs and fry for the prevention of fungal infections. As a secondary use, it is effective against some external protozoans, such as Ichthyophthirius (Ich), Chilodonella and Costia.

The properties of the drug as an oxygen transporter (it converts methemoglobin to the normal oxygen carrying component of fish blood, hemoglobin) allow it to be used in the treatment of known cyanide and nitrite poisoning of aquarium fishes. It has been suggested that newly arrived marine fish placed in Methylene Blue can have their survival rate increased as Methylene Blue aids in the reversal of nitrite and/or cyanide poisoning.

The therapeutic action of Methylene Blue on bacteria and other parasites is probably due to its binding with cytoplasmic structures within the cell and also its interference with oxidation reduction processes.